VANCOUVER (Reuters) – British Columbia’s Green Party plans to decide over the next week which political party to back in the Western Canadian province, its leader said on Wednesday, after final voting results showed the tiny party holding the balance of power.

Official results confirmed that the ruling provincial Liberal Party lost its legislative majority in a May 9 election in Canada’s third most populous province, creating the first minority government there in 65 years.

British Columbians, along with oil and gas companies with big projects in Pacific province, have been anxiously awaiting the final tally since the tightly fought election. The provincial Liberals are unrelated to Canadian Prime Minister Justin Trudeau’s federal Liberals and more right-leaning.

With just three seats in the legislature, the Greens could push the pro-business Liberals out of power by forming a majority government with the opposition New Democratic Party (NDP). The left-leaning NDP took 41 seats and the Liberals 43, Elections BC said.

“We recognize that it is important over the next week or so before the writ is returned to give certainty to British Columbia and that is our target,” Green Party leader Andrew Weaver told reporters.

Next Wednesday marks writ return day, which signals the end of the election period.

Weaver said he is open to negotiations with both the Liberals and NDP, and had meetings scheduled with both.

Many British Columbians consider there to be more overlap between the Greens and the NDP, which both oppose large oil and gas projects such as Kinder Morgan’s Trans Mountain pipeline expansion. The Liberals approved the project. 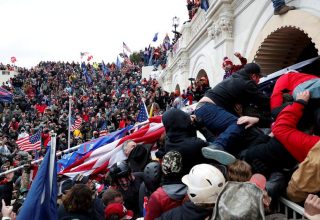 Thousands of U.S. President Donald Trump’s supporters converged on the Capitol, home to both …