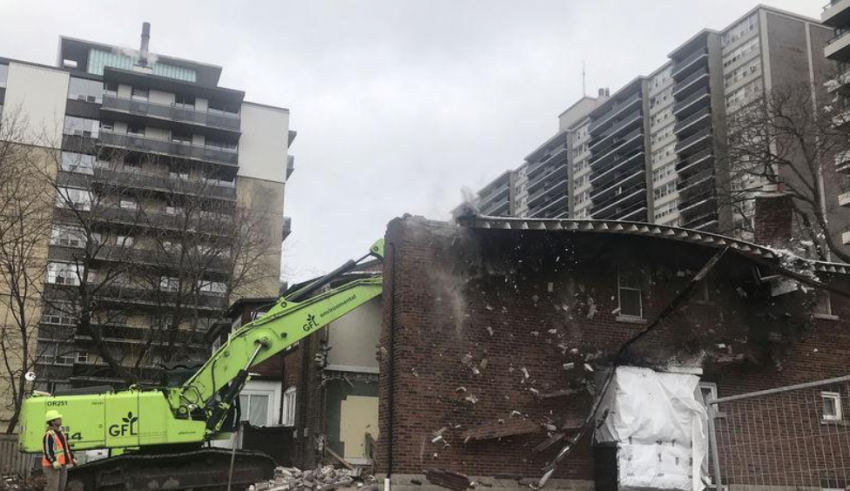 house is demolished to make way for another condominium development in Toronto, Ontario, Canada

Canada’s main financial regulator is coming under increasing pressure from banks and mortgage industry lobbyists to ease a stress test designed to cut out risky lending, but the regulator is expected to hold off on changing the rules, three sources with direct knowledge of the matter told Reuters.

Proponents of a change say easing the terms of the test would alleviate a housing slowdown and stem the flow of borrowers being pushed toward loosely regulated private lenders but one source with direct knowledge of the matter said the regulator is reluctant to meddle with a test it introduced only 13 months ago.

The stress test was part of a range of measures, known as B-20, designed to ensure banks maintained vigilant mortgage underwriting standards at a time of red-hot housing markets in Toronto and Vancouver.

Canadian Imperial Bank of Commerce’s Deputy Chief Economist Benjamin Tal said he supports the principle of a stress test but believes it should be flexible and adjusted to account for interest rate moves and market conditions.

“It’s not something that has to be set in stone. It should be more dynamic,” he said. “You have to assess the damage to the housing market, whether that damage is too severe, and what other forces in the market are leading to slower growth.”

However, since its introduction, markets have cooled, with sales falling in each of the last four months of 2018 and the average price of homes falling in the final three months.

That has led to calls to review the test, taking into account the impact of three interest rate hikes last year as well as other measures including foreign buyers’ taxes in Toronto and Vancouver.

Asked if it would consider amending terms of the test, OSFI said it “monitors the environment on a continual basis and will make adjustments to its guidance when appropriate”.

Banks had initially supported B-20 believing it would help housing markets achieve a “soft landing”, where prices stabilize, and lessen the risk of a housing bubble.

However, one senior banker, who asked not to be named because of the sensitivity of the matter, said there was growing support for the test to be adjusted, possibly to 150 basis points, if interest rates keep rising. Money markets see about a 50 percent chance of another hike before year end.

Mortgage Investment Corporations (MICs), which pool the funds of wealthy individuals, have helped drive that growth. The MICs are supervised by provincial regulators, rather than OSFI, and are not subject to the stress test.

Reuters reported in January that Canadian authorities had discussed measures to limit their growth, including subjecting them to the stress test rule. Finance Minister Bill Morneau said last week that option was not currently being considered.

Three sources with direct knowledge of discussions between OSFI, Canada’s finance ministry, the Bank of Canada and Canada’s federal housing agency told Reuters convincing provinces to apply the test had been viewed as a major obstacle.

Easing terms of the stress test would provide an alternative means of tempering private lenders’ growth by enabling more borrowers to qualify for bank loans, some mortgage experts said.

Ron Alphonso, a Toronto-based mortgage broker who arranges private mortgages for borrowers facing eviction from their homes, said the stress test should be adjusted to take into account interest rate hikes.

“As the interest rates keep climbing up it doesn’t make sense to keep the current B-20 rules in place,” he said. “We shouldn’t be penalizing people artificially.”