A man “in crisis” survived a plunge over the Canadian side of Niagara Falls on Tuesday, according to Niagara Parks police.

The man climbed over a retaining wall on Horseshoe Falls and was swept over the 57-meter (188 feet) drop, said the police service on Twitter. Water rushes up to 40 kilometers (25 miles) per hour over Horseshoe, the largest of three falls that make up the scenic landmark.

Police found him sitting on some rocks near the water’s edge with non-life threatening injuries. They were responding to a Tuesday 4:00 a.m ET call about the incident, and transported him to the hospital.

Buffalo News reported that the high water levels might have saved the man. This “may have tossed him over the rocks at the bottom of the falls,” Michael Clarkson, author of ‘The River of Lost Souls: What We Might Learn From Niagara Falls Suicides,’ told the newspaper.

The falls have always attracted daredevils hoping to add their name to the list of survivors who made it over. Local estimates put the number of deaths caused by attempts or suicides in the thousands. 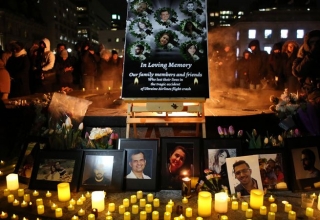