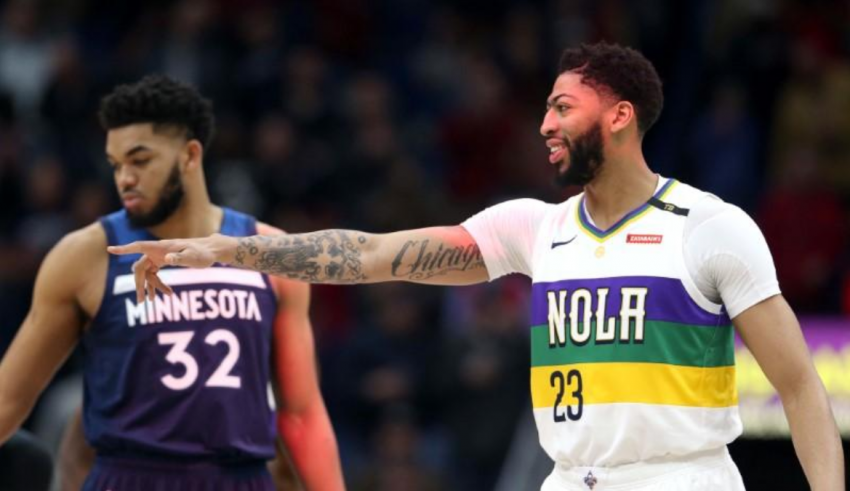 Anthony Davis returned from a three-week absence to score 32 points before his New Orleans Pelicans teammates took over in the fourth quarter of a 122-117 victory over the visiting Minnesota Timberwolves on Friday night.

Davis, who was booed during his pregame introduction and whenever he touched the ball during his first appearance since asking for a trade and recovering from a finger injury, made 11 of 15 field-goal attempts and 10 of 11 free-throw attempts. He also grabbed nine rebounds.

The All-Star forward sat out the final 15-plus minutes of a close game, but there was no indication of a health issue as he stayed on the bench. Jrue Holiday had 27 points, rookie Kenrich Williams added 19 and Tim Frazier and Julius Randle had 12 each for New Orleans.

Karl-Anthony Towns had 32 points for the Timberwolves. Jeff Teague, who came off the bench in his return from an eight-game absence caused by a foot injury, scored 12.

JJ Redick scored 34 points to lift new-look Philadelphia past visiting Denver. The Sixers won in their first game since making a blockbuster deal with the Los Angeles Clippers before the Thursday trade deadline.

Jimmy Butler added 22 points, and newly acquired Tobias Harris had 14. Joel Embiid had 15 points and 12 rebounds for his league-leading 45th double-double of the season. The Sixers snapped a two-game skid on a night when they retired Moses Malone’s No. 2 jersey.

Nikola Jokic led the Nuggets with 27 points, 10 assists and 10 rebounds for his 11th triple-double of the season. Jamal Murray added 23 points, but Denver dropped its third in a row.

The Bucks’ Khris Middleton did not play, nor did Nikola Mirotic, who was acquired from New Orleans at the trade deadline. Mirotic, who still must pass a physical, missed his last seven games with the Pelicans because of a calf strain.

Milwaukee didn’t need either Middleton or Mirotic in winning its sixth consecutive game, as the Bucks shot 54.3 percent from the field. Rookie Luka Doncic led the Mavericks with 20 points.

Stephen Curry saved 10 of his 20 points for a fourth-quarter rally that enabled Golden State to overtake Phoenix for its 11th consecutive win.

Phoenix lost its 13th straight despite leading by as many as 17 points in the first quarter and 94-88 after a hoop by Kelly Oubre Jr. with 8:35 left in the game. The Warriors won for the 14th time in their past 15 games despite losing Draymond Green at the start of the fourth period after he drew his second technical foul.

Bobby Portis scored 30 points in his debut with Washington, which beat visiting Cleveland to end a three-game losing streak.

Obtained along with Jabari Parker in a trade with the Chicago Bulls for Otto Porter Jr. earlier this week, Portis made 12 of 18 field-goal attempts. Bradley Beal had 25 points and 13 assists for Washington. Parker had seven points, 11 rebounds, nine assists and three steals in 23 minutes.

Collin Sexton scored 27 points and Jordan Clarkson added 24 for the Cavaliers, who have lost three straight and 21 of 24. Forward Kevin Love returned after missing 50 games because of a left foot injury. He started the game and played six minutes in his first action since Oct. 24, scoring four points.

Drummond overcame early foul trouble to shoot 12-for-15 from the field while Griffin recorded the same numbers from the free-throw line for the Pistons, who scored a season-high 41 points in the first quarter. Detroit won for the fourth time in five games and produced its sixth straight victory versus New York.

Dennis Smith Jr. scored 19 of his career-high 31 points in the first half for the NBA-worst Knicks, who have dropped 23 of their past 24 games overall. Smith shot 9-for-15 from the field and added a team-high eight assists.

Lauri Markkanen collected 31 points and 18 rebounds for his 10th double-double of the season and fifth in six games as visiting Chicago led most of the way in beating Brooklyn.

Markkanen’s third straight 30-point showing helped the Bulls snap a six-game losing streak to the Nets and also win for the third time in 19 games since Dec. 30. Otto Porter Jr. helped the Bulls stretch the floor by contributing 18 points and hitting four 3-pointers in his team debut after being acquired from Washington on Wednesday.

D’Angelo Russell scored 23 points for the Nets, who lost for the fourth time in five games.

Bogdan Bogdanovich added 16 points for the Kings, who held Miami to a season-low 13 fourth-quarter points.

The referendum was held on Sunday in Saint-Apollinaire, Quebec, a town of about 5,000 …