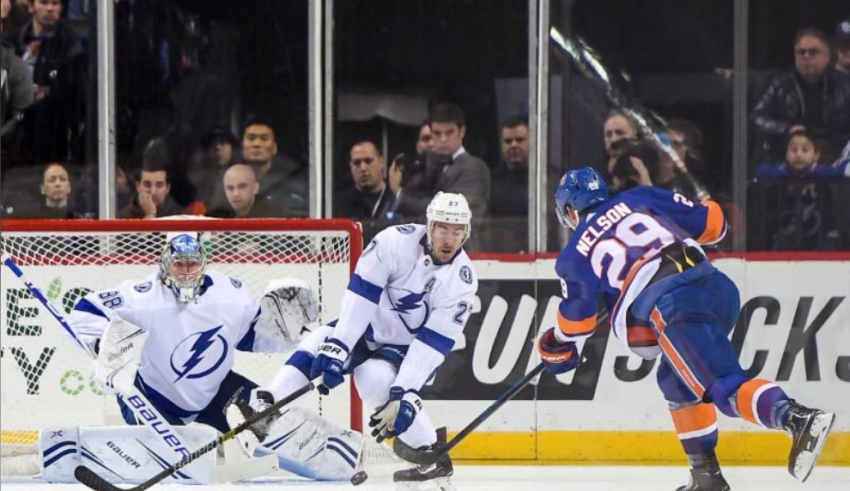 The New York Islanders scored three times in the first five minutes, the fourth line scored twice, and Thomas Greiss made 38 saves in a 5-1 win over the Tampa Bay Lightning in Brooklyn, N.Y., on Sunday.

Brock Nelson, Cal Clutterbuck, Devon Toews, Casey Cizikas and Josh Bailey scored for the Islanders, who won for the 11th time in 14 games, moved to 17-7-4 against the Eastern Conference and became the first Metropolitan Division team to beat Tampa Bay in 13 games this season.

Greiss earned his 13th win, Matt Martin had two assists, and linemates Cizikas and Clutterbuck added assists as the Islanders broke a stretch of playing in five straight one-goal contests. The Islanders are 6-0-0 in the second game of back-to-backs.

Ryan McDonagh scored Tampa Bay’s goal, and Andrei Vasilevskiy made 23 saves. The Lightning had their three-game winning streak end and are 21-3-1 in their last 25.

The result gave first-year Carolina coach Rod Brind’Amour a win in his first game at the helm of the Hurricanes against Nashville coach Peter Laviolette, who was behind the Hurricanes’ bench when Brind’Amour was captain of the 2006 Stanley Cup championship team. Saku Maenalanen, Justin Williams and Lucas Wallmark also scored for the Hurricanes, who’ve won seven of their last eight games.

The Ducks lost their 11th straight game (0-7-4). They have led in six of the past eight losses, including three times by multiple goals. Carter Rowney assisted on all three goals for the Ducks, as Brian Gibbons, Rickard Rakell and Andrew Cogliano scored.

Mark Giordano collected two goals and one assist to move into the top 10 on the franchise’s all-time points list in host Calgary’s rout of Arizona.

In his 800th career game, Giordano moved ahead of Jim Peplinski on Calgary’s all-time point list with his 425th. Goalie Mike Smith made 22 saves for the Western Conference-leading Flames, who are riding a five-game winning streak and snapped Arizona’s three-game winning streak.

Matthew Tkachuk scored twice and Johnny Gaudreau and Sean Monahan both netted one goal and one assist for the Flames, while Jordan Osterle scored Arizona’s only goal. Coyotes goalie Adin Hill, who grew up in Calgary, made 19 saves.

Atkinson snapped a 2-2 tie when he scored his 26th goal on a deflection of defenseman Zach Werenski’s shot from the right point. It was one of three goals in the second period for the Blue Jackets, who improved to 11-3-1 in their last 15 games and 8-3-1 in their last 12 games against the Rangers.

Mats Zuccarello scored twice for the Rangers, who lost for the sixth time in seven games.

Ben Hutton’s goal at 7:20 of the third period sparked Vancouver over visiting Florida.

Hutton gave the Canucks a 2-1 lead as he one-timed Troy Stecher’s long rebound past Florida goaltender Roberto Luongo. The Canucks then added three more goals en route to their first win in four games. Loui Eriksson led the Canucks with a goal and two assists.

The Panthers, who got their goal from Frank Vatrano, bore their sixth straight loss.