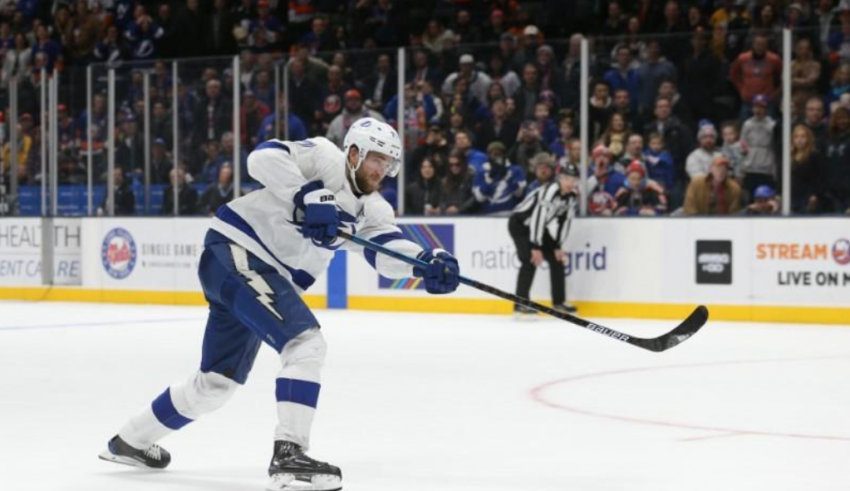 Victor Hedman scored the only goal in the shootout Friday night as the Tampa Bay Lightning edged the host New York Islanders 1-0.

The Lightning have alternated wins with losses in their last seven games. The Islanders have lost two straight but only five of their last 20 (15-3-2).

While on a power play, Kuznetsov gained the puck at the blue line, worked his way to the net and threaded the needle with a top-corner shot for his 10th goal of the season. Capitals star Alex Ovechkin was suspended for the contest as a result of his skipping the All-Star Game.

Each team lost a player due to injury in the clash. Calgary defenseman Travis Hamonic left with an apparent leg injury, and Washington’s Lars Eller suffered a lower-body injury.

Kane, a Buffalo native, reached 900 career NHL points with his first goal 50 seconds into the second period. That also gave him the fifth 10-game point streak of his career, making him only the third player in Blackhawks history to have that many after Bobby Hull (five times) and Denis Savard (11 times).

Brandon Saad scored twice, and Drake Caggiula, Duncan Keith and Connor Murphy each added a goal for Chicago, who was playing for the first time since the All-Star break. Jack Eichel, Jason Pominville and Kyle Okposo scored for the Sabres, who were playing their third game in four days since the break.

Bryan Rust and Jake Guentzel each scored twice as Pittsburgh held on for a win over visiting Ottawa for their second straight win.

Teddy Blueger also scored, and Phil Kessel and Sidney Crosby each had two assists for the Penguins, who built leads of 3-0 and 4-1. Goaltender Casey DeSmith stopped 37 of 40 Senators shots. The Penguins played without center Evgeni Malkin, who was out because of an upper-body injury.

Bobby Ryan, Mikkel Boedker and Matt Duchene scored for Ottawa, which lost its third in a row. Anders Nilsson made 35 saves and picked up an assist.

The Panthers, who had not played in 10 days, had their three-game win streak snapped. The Panthers played short-handed after they traded Nick Bjugstad and Jared McCann to Pittsburgh earlier in the day. Centers Derick Brassard and Riley Sheahan were acquired by Florida, but did not arrive in time to play.

Carolina came off an extended layoff and executed when it mattered most for a victory against visiting Vegas in Raleigh, N.C.

Shea Theodore scored both goals for Vegas as both teams were playing for the first time since the All-Star break. Vegas goalie Maxime Lagace, who was making his season debut, stopped 27 shots. He appeared in 16 games last season for the Golden Knights.

Defenseman Danny DeKeyser scored at the 2:40 mark of overtime, giving host Detroit a thrilling win over Toronto in the first game since the All-Star break for both teams.

DeKeyser’s goal was just his second of the season. Andreas Athanasiou slid a pass from the left circle to DeKeyser, who easily beat goaltender Frederik Andersen in front of the net.

Athanasiou assisted on all of Detroit’s goals. Gustav Nyquist and Dylan Larkin also scored for the Wings while Jimmy Howard stopped 19 shots. Auston Matthews and Patrick Marleau each had a goal and an assist for the Leafs. Andersen made 30 saves.

Tyler Seguin scored a pair of third-period goals, including the game-winner, and Ben Bishop stopped 21 shots as Dallas did just enough to beat visiting Minnesota and capture its third game in a row.

Seguin’s decisive goal came with 7:42 to play in the game on a shot from just inside the circle, which handcuffed Wild goaltender Devan Dubnyk before trickling through his legs and over the line. Seguin added an empty-netter off an Andrew Cogliano assist with 24 seconds remaining to cement the game.

The loss snapped a three-game win streak for the Wild that was Minnesota’s longest since winning five straight outings in October.