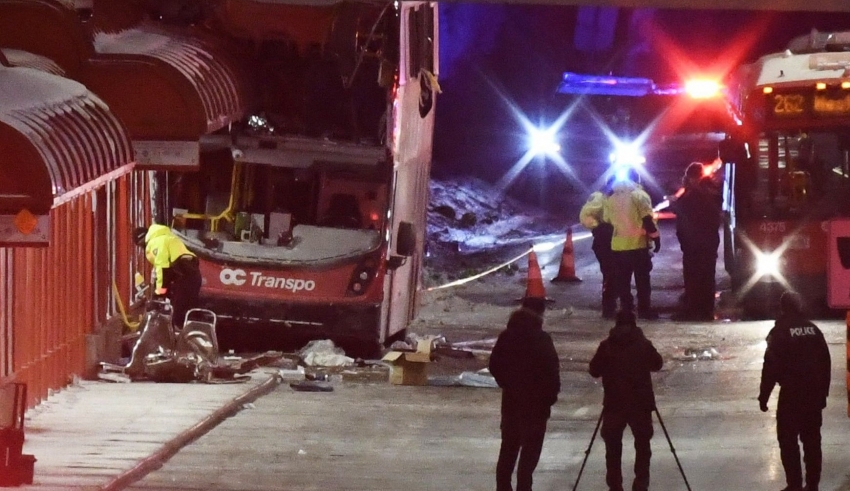 Three people were killed and nearly two dozen others were injured when a double-decker bus struck a bus shelter in the Canadian capital of Ottawa during rush hour, city officials said.

Part of the upper right side of the bus was shorn off in the collision, which happened at a busy transit station in the west end of the city.

“It is with deep sadness that I report there were three confirmed casualties, two of which were on the bus and one that was on the platform,” Ottawa mayor Jim Watson told reporters at a news conference.

Watson also said that 23 people were injured in the collision, some very seriously, and taken to hospital. The Ottawa Hospital confirmed on Twitter that it had received nine patients in critical condition from the crash.

Ottawa police chief Charles Bordeleau said the bus driver was arrested at the scene and taken in for questioning, but he declined to provide further details.

“An investigation is now underway on the cause of the collision,” he told reporters.

Investigators were expected to be on the scene through the night, with frigid temperatures in Ottawa expected to dip down to -22C (-7.6 F) overnight.

“There’s no question that the weather adds complexity at the scene,” said Bordeleau. It was unclear if weather contributed to the crash.

Photos and video from the scene showed emergency responders treating a number of people on the ground, as others used ladders to unload passengers trapped on the bus’ upper level.

Bilal Gill, a passenger on the upper deck, told broadcaster CBC News that people at the front were pinned under their seats.