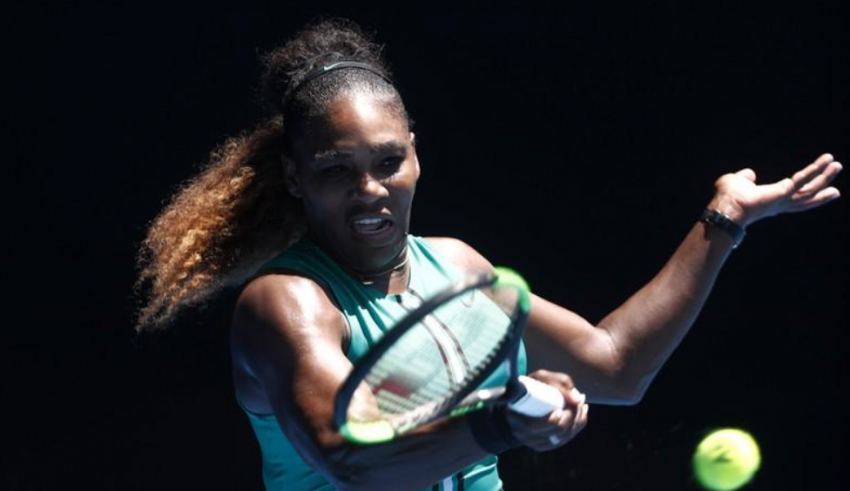 MELBOURNE (Reuters) – Serena Williams squandered four match points and blew a 5-1 lead in the deciding set as seventh seed Karolina Pliskova produced a fightback for the ages to claim a 6-4 4-6 7-5 quarter-final win over the American great at the Australian Open on Wednesday.

Williams, chasing a milestone 24th Grand Slam triumph, also saved two match points in the last game but netted on the third as the big-serving Czech shocked a packed Rod Laver Arena with her remarkable rally from the brink of defeat.

The American’s hopes of matching Margaret Court’s all-time record of Grand Slam singles titles, and claiming a first since becoming a mother in 2017, were denied once more, after she also lost in finals at Wimbledon and the U.S. Open last year.

While disappointed, the 37-year-old was philosophical in defeat and pledged to regroup for another tilt at the French Open.

“It’s definitely not easy for me. From day one, I expect to go out and, quite frankly, to win,” the seven-times champion in Melbourne told reporters.

“That hasn’t happened. But I do like my attitude… I’ve only been playing 10 months, but I expect to win, and if I don’t, it’s disappointing.

“I rather think of it that way and know that it’s going to happen sooner or later than making an excuse for myself. I don’t like making excuses.”

The brave Pliskova advanced to meet Naomi Osaka in the last four, denying Williams a chance to avenge her controversial U.S. Open final defeat to the Japanese fourth seed.

“Normally I’m having a lot of comebacks, but maybe from a set down or a break down, so nothing like this. I think it’s the best comeback ever so far in my life,” an elated Pliskova told reporters after qualifying for her first Melbourne semi-final.

“This time I really believed, like, (she’s) still a player, I know she’s the greatest ever, but I don’t want to put her somewhere where I would not have a chance to beat her.”

Pliskova avenged her quarter-final loss to Williams at last year’s U.S. Open and now holds an enviable 2-1 Grand Slam record against the American, having beaten her in the 2016 semi-finals at Flushing Meadows.

The 26-year-old former world number one, chasing her maiden Grand Slam title, is the second Czech into the semi-finals after double Wimbledon champion Petra Kvitova thrashed home favorite Ashleigh Barty on Tuesday to book a match with Danielle Collins.

Locked in a three-way battle with Osaka and Kvitova to take the world number one spot from Simona Halep, Pliskova will emerge as the top-ranked woman if she claims the title.

Williams, seeded 16th as she continues her return from maternity leave, rolled her ankle when serving for the match at 5-1.

She promptly double-faulted after missing a passing shot on her first match point and was broken after dumping a backhand into the net.

Pliskova held on grimly, saving three more match points when serving to stay alive at 5-4, before breaking Williams to love and charging to 40-0 in the final game.

Williams saved two of the match points, the second with a courageous backhand winner, but Pliskova held firm to add another highlight to a tournament laden with upsets.

The American said her ankle was not a factor in defeat, and credited Pliskova for playing “unbelievable” on match points.

“She literally played her best tennis ever on those shots,” she said.