February 09, 2023
3 New Articles
Home Health Supreme Court to rule on whether B.C. has to give health data to cigarette maker

The Supreme Court of Canada will rule Friday on whether British Columbia has to hand millions of patients’ health information over to tobacco giant Philip Morris International.

It’s the newest chapter in the province’s legal fight to force cigarette makers like Philip Morris to compensate the province for the cost of treating tobacco-related illnesses — a battle that started way back in the late 1990s, when it first filed a lawsuit against 13 tobacco companies. Collectively, the provinces suing the tobacco firms are seeking about $120 billion.

The provincial government at the time argued companies advertised to children, marketed “light” cigarettes that they knew were no safer than regular cigarettes, and conspired to suppress research on the health risks of smoking.

As a result, B.C. argued, those companies should now have to help pay the cost of treating tobacco-related diseases.

B.C.’s arguments mirrored similar legal action in the United States at the time that led to tobacco companies paying hundreds of billions of dollars to state governments.

But Philip Morris International argues it needs access to individuals’ health data to defend itself in court.

The province’s lawyers have argued that releasing individuals’ health information — even anonymously — could violate privacy laws.

“These databases include individual-level records of every hospital, medical and other health care attendance, diagnosis and treatment provided during the past 25 years to each insured person,” argues B.C. in documents filed with the Supreme Court. 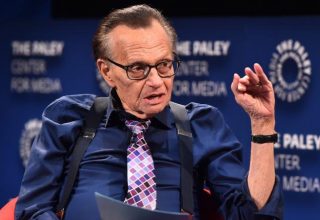 Larry King, the longtime CNN host who became an icon through his interviews with …