The United States said on Monday it would expel 60 Russian diplomats, joining governments across Europe in punishing the Kremlin for a nerve agent attack on a former Russian spy in Britain that they have blamed on Moscow.

It was the strongest action that U.S. President Donald Trump had taken against Russia since coming to office. He has been criticized by Democrats and members of his own Republican Party for failing to be tough enough on Russia over U.S. allegations of Russian meddling in the U.S. electoral system including the 2016 presidential campaign.

British Prime Minister Theresa May, welcoming the show of solidarity, said 18 countries had announced plans to expel Russian officials. Those included 14 European Union countries. In total, 100 Russian diplomats were being removed, the biggest Western expulsion of Russian diplomats since the height of the Cold War.

British Foreign Secretary Boris Johnson said on Twitter that Monday’s “extraordinary international response by our allies stands in history as the largest collective expulsion of Russian intelligence officers ever and will help defend our shared security.”

May said the coordinated measures sent the “strongest signal to Russia that it cannot continue to flout international law.”

Britain had evidence Russia has investigated ways of distributing nerve agents for assassinations, May told parliament.

Russia’s Foreign Ministry called the expulsions a “provocative gesture.” The Kremlin spokesman said the West was making a “mistake” and that President Vladimir Putin would make a final decision about Russia’s response.

Moscow has denied being behind the attack on Sergei Skripal and his daughter in the southern English city of Salisbury. Skripal, 66, and Yulia Skripal, 33, were found unconscious on a public bench in a shopping center on March 4 and remain critically ill in hospital.

“We assess that more than 130 people in Salisbury could have been potentially exposed to this nerve agent,” May said. 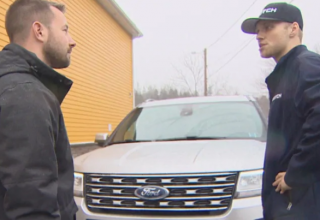