Ontario Provincial Police say one man is dead after a single-vehicle crash on highway 403 overnight Friday.

They said a 29-year-old man from Whitby was driving the wrong way on Highway 403 around 3:30 a.m. before crashing into a concrete guardrail.  He was pronounced dead at the scene.

OPP said they aren’t sure when the vehicle got onto the highway but it was travelling eastbound in the westbound lanes before colliding near Eglinton Avenue.

Sgt. Kerry Schmidt said in a periscope video Saturday morning that they don’t know the cause yet but are considering alcohol and distraction.

Express lanes were closed on the westbound side of Highway 403 but have now reopened. 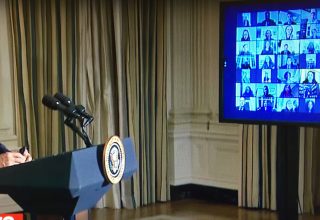 President Biden told to new appointees in the government, “I am not joking when …