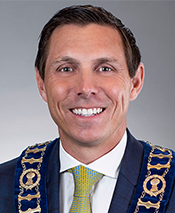 Present Mayor of the City of Brampton and Conservative Party of Canada leadership contender did not attend the debate, hosted by the Canada Strong and Free Network. The main question in the debate was why Conservatives lost last elections. The contenders went on and argued on many other issues. Brown on the other hand focused on making contacts with the people on the ground.

During the process of making members debates doesn’t work. They work when the members are made, and the members are asked to listen to the participating candidates and make the decision. Debates don’t bring members.

Replying to a question why Brown did not attend, he replied, “Instead of participating in yesterday’s eye-roll-generating political theatre, I was on the ground in Atlantic Canada,” he said. “The support I’ve already received for my campaign in Atlantic Canada has been amazing. I was working all week building the party in areas (my opponents) have very little connectivity.”

TORONTO — As Kevin Pillar rounded third, he had one thought on his mind …