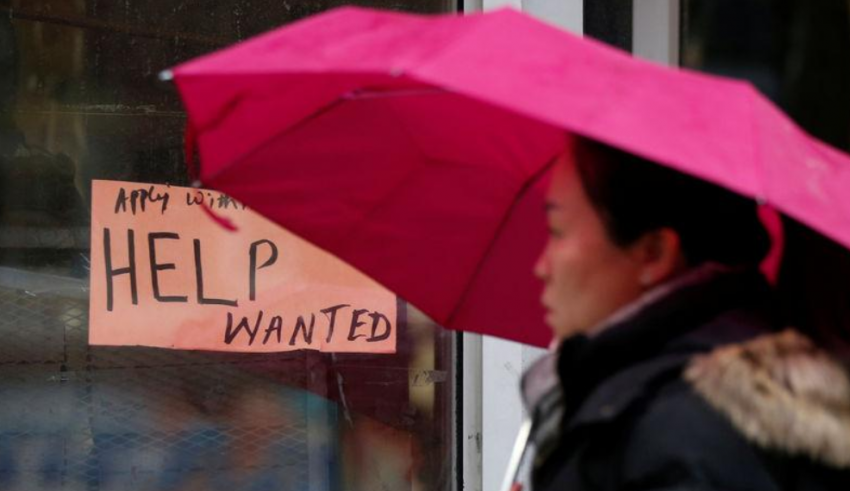 A woman walks past a "Help wanted" sign at a retail store in Ottawa, Ontario, Canada

The Bank of Canada looks set to leave interest rates unchanged next month despite bumper jobs numbers in January that far exceeded market expectations and highlighted the strength of the Canadian economy, analysts said.

Statistics Canada reported on Friday that employers added 66,800 jobs in January, far better than the gain of 8,000 that analysts forecast in a Reuters poll, while the unemployment rate ticked up to 5.8 percent as more people sought work.

It was the second month of outsized gains in the last three, though economists said low wage growth and sagging oil prices would hold back any action by the central bank the next time it decides on interest rates on March 6.

“That provides reason for the Bank of Canada to keep any tightening at a gradual pace,” said Paul Ferley, assistant chief economist at the Royal Bank of Canada.

The economy added 99,200 services sector jobs in January, mostly in wholesale and retail trade, as well as professional, scientific and technical services. That was offset by a loss of 32,300 goods sector positions, mostly in agriculture and construction. Resource sector jobs fell by 4,600.

“I think it does underscore that for all the doom and gloom in the market, the Canadian economy is not in a terrible place in quite a few sectors,” said Andrew Kelvin, senior rates strategists at TD Securities. “Outside the energy economy, things are pretty robust.”

The bumper jobs data is one of the last major indicators ahead of the March 6 rate decision. The central bank stayed on the sidelines last month after five hikes since July 2017, and most analysts expect no action.

Governor Stephen Poloz said on Dec. 17 that the pace of tightening could be interrupted or sped up depending on the economic circumstances.

The average year-over-year wage growth of permanent employees, which is closely watched by the central bank, was 1.8 percent in January, up slightly from 1.5 percent in December.

“It’s an encouraging report but I don’t think it’s going to have a big impact on policy,” said Doug Porter, chief economist at BMO Capital Markets.

The request had “significant humanitarian implications”, it warned, and could prompt other countries to …