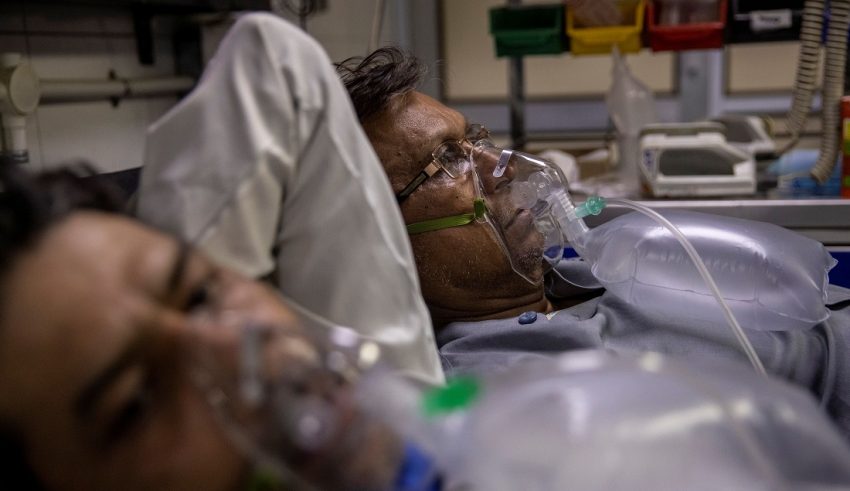 Patients suffering from the coronavirus disease (COVID-19) get treatment at the casualty ward in Lok Nayak Jai Prakash (LNJP) hospital, amidst the spread of the disease in New Delhi, India April 15, 2021. REUTERS/Danish Siddiqui

There is a split scenario unfolding as the world battles the pandemic.

In countries like the United States, Canada and the United Kingdom, jubilant, newly-vaccinated people hug their loved ones after a long period of separation. In India, distraught families count their dead.
Sick people are being turned away from hospitals that have run out of beds and oxygen, as the number of new cases rises to record levels each day, creating a national crisis with global repercussions.
The more the virus spreads, the more chances it has to mutate and create variants that could eventually resist current vaccines, threatening to undermine other countries’ progress in containing the pandemic, experts warn.
“If we don’t help in India, I worry about an explosion of cases” around the world, said Dr. Ashish Jha, dean of the Brown University School of Public Health.

Funeral pyres for Covid victims at a crematorium in New Delhi in early April.
While the immediate priority is saving the lives of those already sick, vaccinating the country is considered crucial to stop the virus from spreading. But, despite being home to the world’s biggest vaccine producer, India doesn’t have enough doses, and there’s no fast and simple way to make more.

As India continues to grapple with an unrelenting second wave of Covid-19, some neighboring countries in South Asia are seeing their own surges in case numbers, prompting border closures and travel bans.

India is now reporting approximately 1 million new coronavirus cases every three days, with the daily death toll exceeding 3,293 on Wednesday, according to data from the Indian Ministry of Health.
The outbreak has pushed the country’s healthcare system to near breaking point. With no space left in hospitals, patients are being left to die at home, in ambulances and outside clinics. Even those who are given a bed remain in danger, with hospitals running out of oxygen and asking patients’ families to bring their own.
If the Indian outbreak can’t be contained and spreads to neighboring countries with low vaccine supplies and weak health systems, experts warn the world risks replicating scenes witnessed in India — especially if newer, potentially more contagious variants are allowed to take hold. And, as India has a leading role in making vaccines for other nations, failing to to stop its spread there could endanger the vaccine rollout worldwide.
Load More Related Articles
Load More By News Desk
Load More In Corona Virus Disease
Click To Comment

A government decision to strip Canadian citizenship from an elderly man, who argued he …